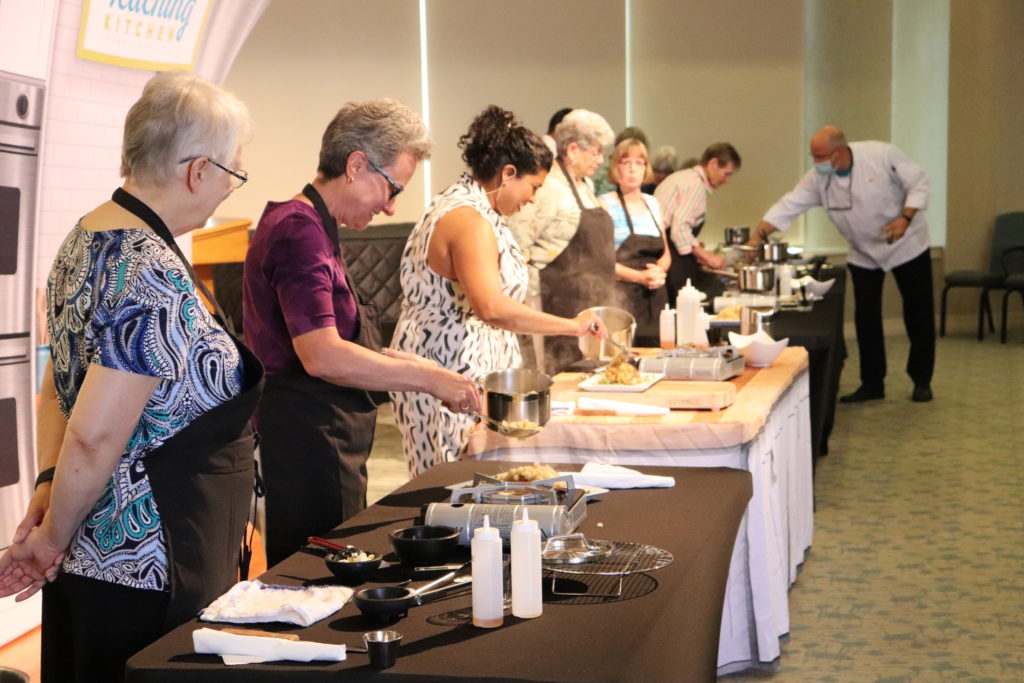 Luther Acres senior living community welcomed celebrity chef Aarti Sequeira on Wednesday, June 15, for an interactive, on-site cooking demonstration. Aarti – a cooking show host, cookbook author, journalist, television producer and food personality – visited the campus, at 600 E. Main St., Lititz, to conduct a “Teaching Kitchen” hands-on experience. Alongside several residents, she prepared chai-brined pork chops with spiked ‘n’ spiced apple chutney. She spoke about her upbringing in India and how her favorite culinary dishes are inspired by her background. Chai tea was also served during her presentation for residents who gathered to watch the live demonstration in the campus Community Room.

Later that evening, the pork chop recipe was presented at the annual Luther Acres Resident Summer Picnic as a pulled pork sandwich with chutney as a condiment.

Following the cooking demonstration, Aarti took time to answer questions from residents, as well as give away several cookbooks. She was intrigued by traditional Pennsylvania Dutch cooking and its use of saffron in several dishes. The residents suggested she try real chicken pot pie (no crust, square noodles!) and shoofly pie while she was in Lancaster County, and she received plenty of recommendations for local farmer’s markets and restaurants. She also posed for photos and autographed cookbooks for both residents and staff members.

Aarti is a mainstay on The Food Network after winning Season 6 of “The Next Food Network Star.” She is known for her “trademark combination of an infectious cackle and a unique signature food style: American favorites with an Indian soul,” according her biography on her website, www.aartisequeira.com. She has hosted her own shows, “Aarti Party,” and the travel show, “Hidden Eats, USA” and serves as a judge on hit shows such as “Guy’s Grocery Games” and “Cooks vs. Cons.”

Aarti describes herself this way: “A journalist by trade and a cook by obsession, I’m addicted to discovering recipes that reveal a moment in a culture’s history and how it can help us understand where we are now. (And coffee. I’m also addicted to coffee.) I’m on a quest to bring us back to the table so we can relish our loved ones, embrace future friends and give thanks to the One from whom all good things come.”

Aarti’s appearance was part of Morrison Living’s Celebrity Chef Series, offered in partnership with Luther Acres to bring interactive and engaging culinary experiences to residents. Morrison Living is the culinary services provider for Luther Acres and other Luthercare communities.